You are here: Home / Blog / Events 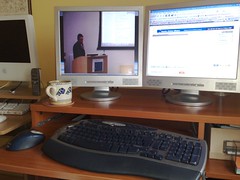 I was unable to attend the blogging conference in Dublin on saturday, organised by the European Commission. With a lot of foresight, Philippe and Cian ensured that people like myself could view proceedings by streaming most of the event with Ustream.TV;

Well done guys – the presentations I saw were good; I thought the workshop with Harry, Damien, Richard and Joe was excellent – it’s a shame that it was so short.

END_OF_DOCUMENT_TOKEN_TO_BE_REPLACED

The following notes were taken from talks I attended this morning. The content has also syndicated to Web2Ireland.

END_OF_DOCUMENT_TOKEN_TO_BE_REPLACED

Have spent the morning and early afternoon so far – flitting between the various workshops. Stowe Boyd unsurprisingly – had a full house for his pitch – likewise, Kathy Sierra’s session on creating passionate users.

Have met up with some of the Irish contingent – Brian O’Malley and Jonathan from EI, Benjamin Mosse of AP in New York and James Galvin.

Wifi access has only now started to cope with demand – my attempts to microblog to Twitter or Jaiku via my Nokia 770 might have been successful early on as I managed to corral one of the hens teeth-like IP addresses – but I was then cruelly thwarted by problems with actually using “Post” on Jaiku, or actually even logging using Twitter.

I’m travelling to the Web2Expo Conference in Berlin today thanks to the guys in Web2Ireland. Fours days was just too much for me though – I travel back to Ireland on Wednesday afternoon. I’m currently in the airport, reviewing the lineup and deciding what I can or cannot get to – should be fun.Of course, I will probably also use the occasion of the event to finally drop the wraps on some stuff I’ve been working on over the past number of weeks – part skunworks, part public good – a bit of a combination.

Another by product should be more insight for a paper I am presenting at the HISI conference later this month entitled “Web2.0 and Healthcare : Avoiding Hype, Reaping Benefits”. More information over on the blog I maintain which discusses the use of IT and Technology in Healthcare – I’ve thrown out an invitation to ask people for items that I should cover and discuss in the presentation.

Web2Ireland recently had a competition with the prize as free tickets to Web2Expo Berlin.

Via a small skunkworks project that we’re currently undertaking, we managed to extract a couple of tickets. The event is on from 5th-8th November, full details here.

So if you want to go to Berlin, and want a free ticket (preference will be given to somebody in Ireland) leave a comment or drop an email.

Dropped in on BarCamp Dublin for a few hours on Saturday, and caught talks by Darren, Sean and Cengal, as well as the plenary.

Darren is a slick presenter and gave some nice insights into running media/viral campaigns – but he was badly let down by wifi connectivity; in this scenario, am I the only one that thinks that the bandwidth should go to the the presenter?

As usual, Sean O’Sullivan gave an entertaining and informative overview into the development pangs for MySay, and Cegala talked on wooing the financial sector.

Chatted with Eamon Walshe of Exoftware and Sean McGrath at lunch break – did a project with Eamon a few years back, and first learned about Python with Propylon back in 2001 with Sean.

The plenary was useful, but a bit too disjointed for me – getting more traffic to your blog and dealing with comments seemed just a little, well, pedestrian to me for this event; Darren did offer some interesting analogies on comments though; in a recent blog survey that Capulet did – one respondent said that comments ‘were like crack[cocaine]‘.

On the whole blogger death-threat thing, he mentioned the long tail of fame – which sounds pretty plausible; if you have a community or audience to your blog, and that audience grows – chances are (nay, certainty is) you will get responses which are rude and nasty. being famous, even within a potentially small, long tail audience, might draw stalker types that traditionally follow the traditional targets. scary, but plausible…

note to self : don’t attempt to introduce yourself to some one before they are about to get on stage to speak. Tom – might chat to you again some time.

Well done to the organising team, and I look forward to the next one.