Northwest Connects on Saturday seemed to be a great success. I’m not saying that as one of the event organisers, or as a sponsor, or let it be said as one of those who actually made it in the end to a lot of the talks – just two and a half.

My positive summation is based on the people I talked through during the day and from some of the online comment and feedback. Attendees have been very generous with their praise.

My own rude measure of success is fairly straightforward – did we have a high turnout for registration and the networking event? We did – over 80 people. Did we have a high-turnout for the closing panel and wrapup? – over 60 people methinks.. 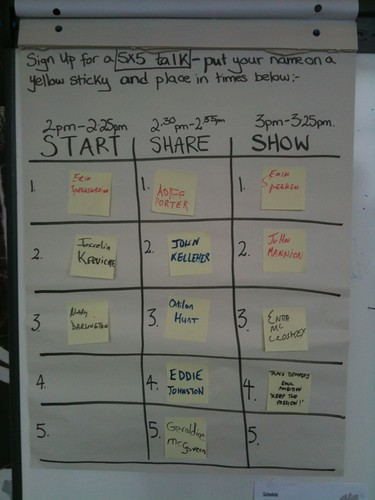 5 by 5 talks – this was fully subscribed to in the end.

Not bad at all for a frosty, fogbound November saturday in Sligo.

Another one of my personal measures is the mix of business types; I did a rough breakdown of the attendee list mid last week; about 40% was web, online, design and creative type companies; that’s a very nice mix and not too overwhelming.

So what I did say in the wrap up on the day – that the choice of #nwc09 as a tag was a good one, and what are the chances of this event being run again in 2010?

I would say that it is highly likely – but first we will have to do our event post-mortem, analyse the comment forms, get feedback from speakers and sponsors and so on. Part of that process for improvement will also be people going to other events in different parts of the country and beyond, and bringing back ideas that we can use.

I think there might be room as well for a barcamp type event (lower organisation overhead) – with a theme to be defined; ones that occur to me would be recessionCamp (that sounds so negative but would actually be all about positivity), recoveryCamp or just a plain, straightforward bizCamp…

Finally – taking part in this was good fun – stressful at times – but fun, working with all of the people below; if you are not already following or linked in to them – you should be.

Want to join the discussion?
Feel free to contribute!